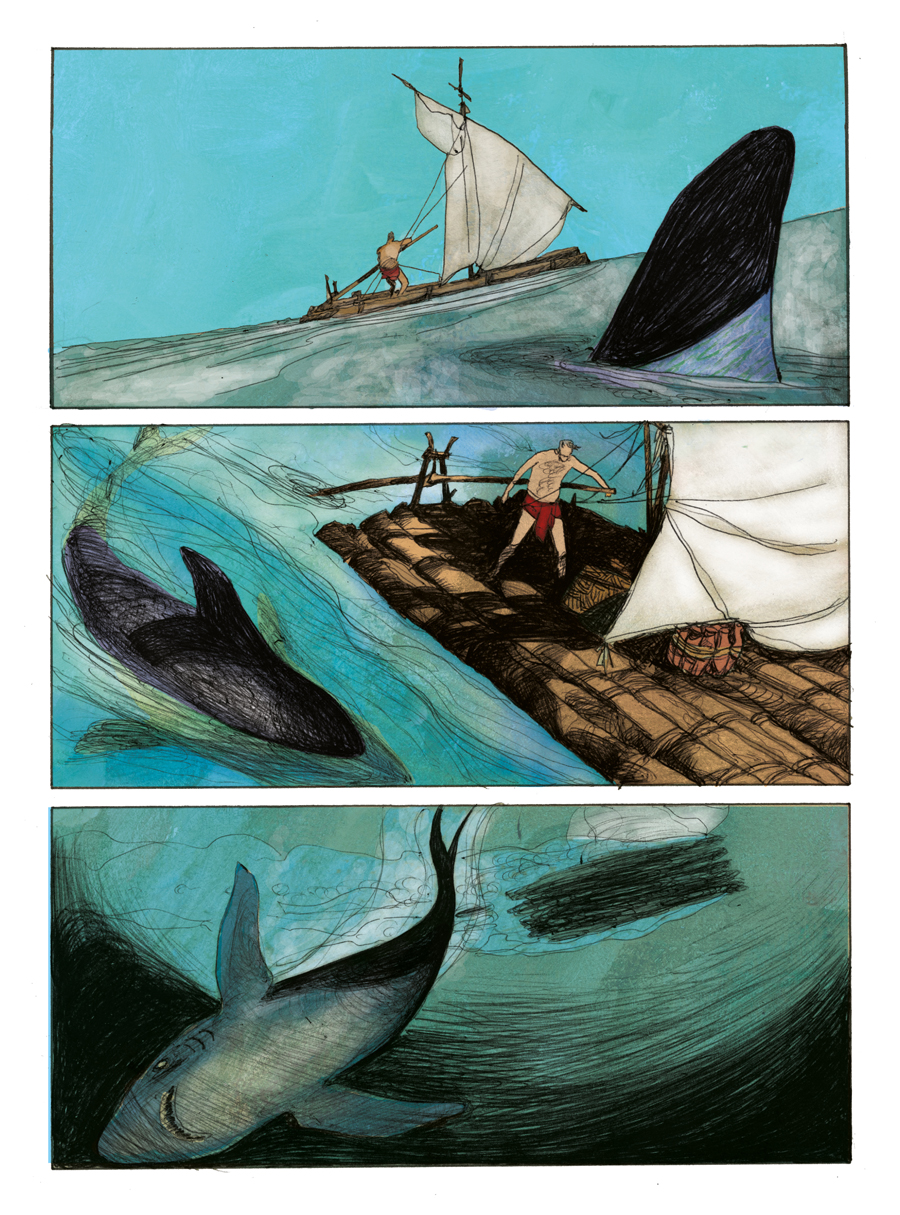 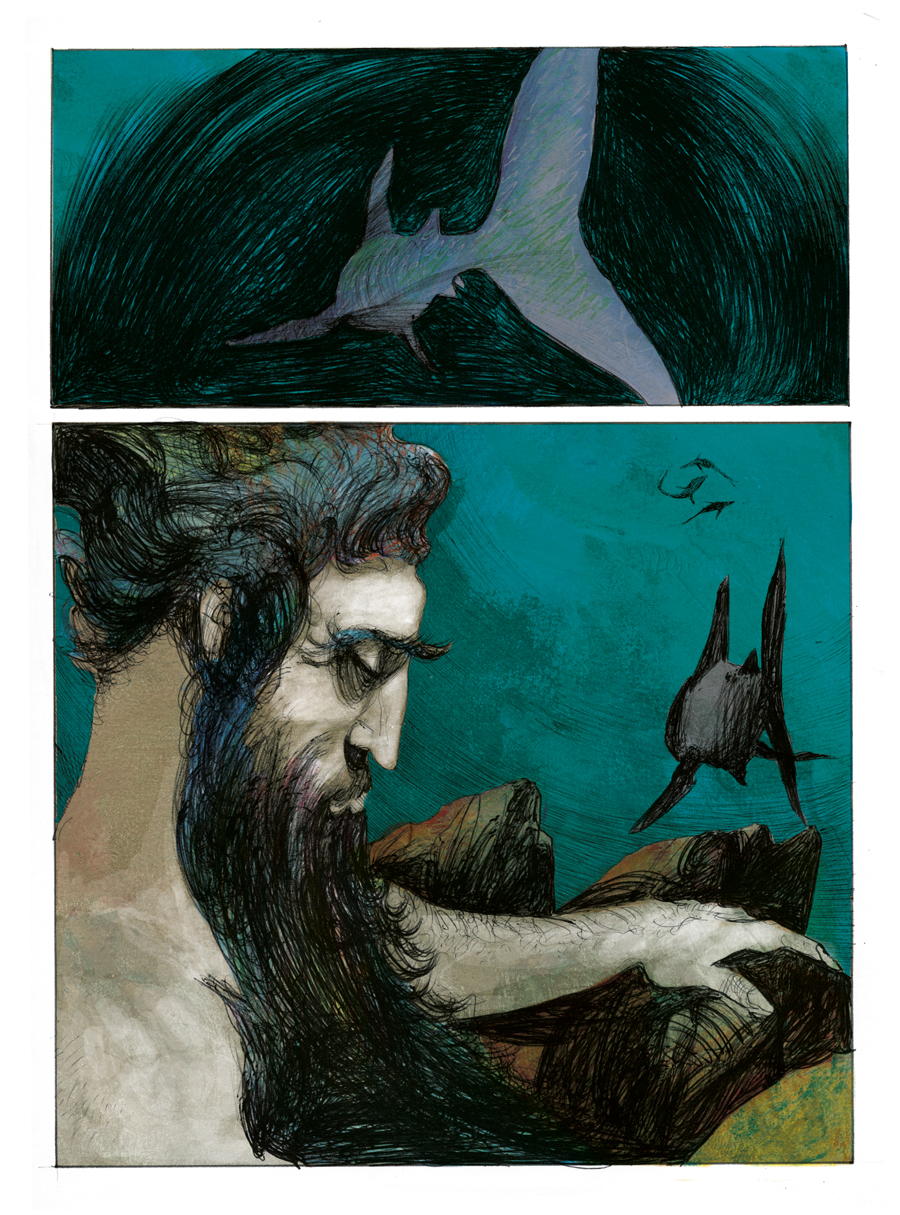 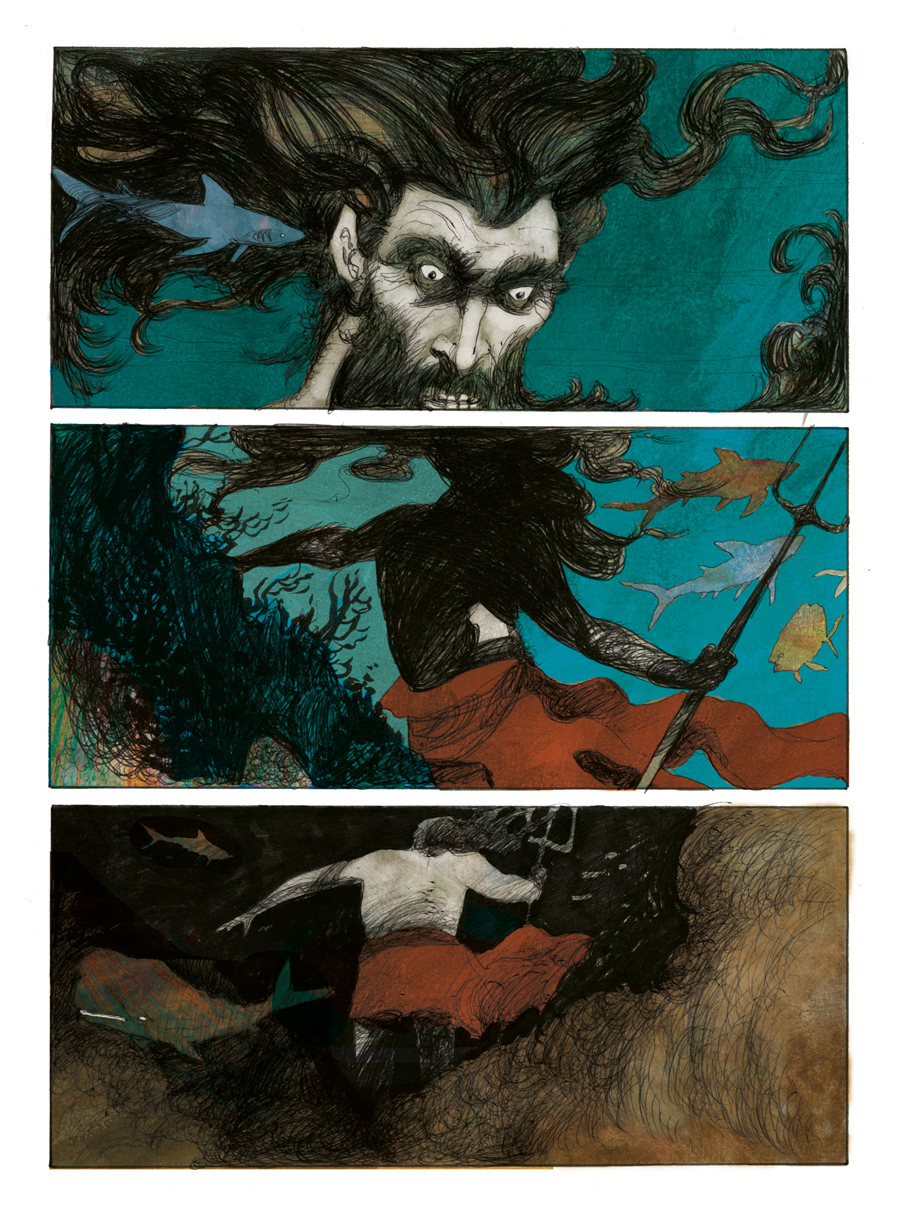 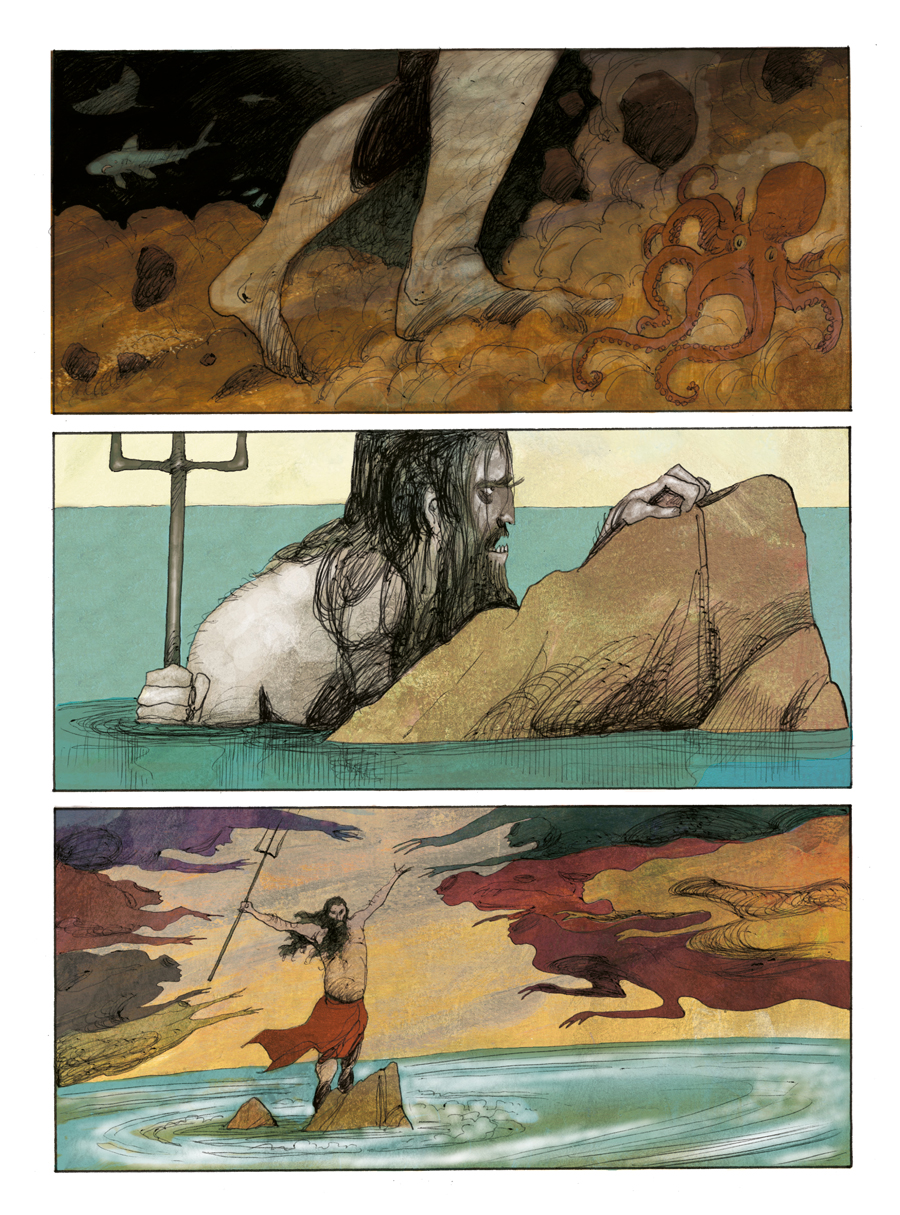 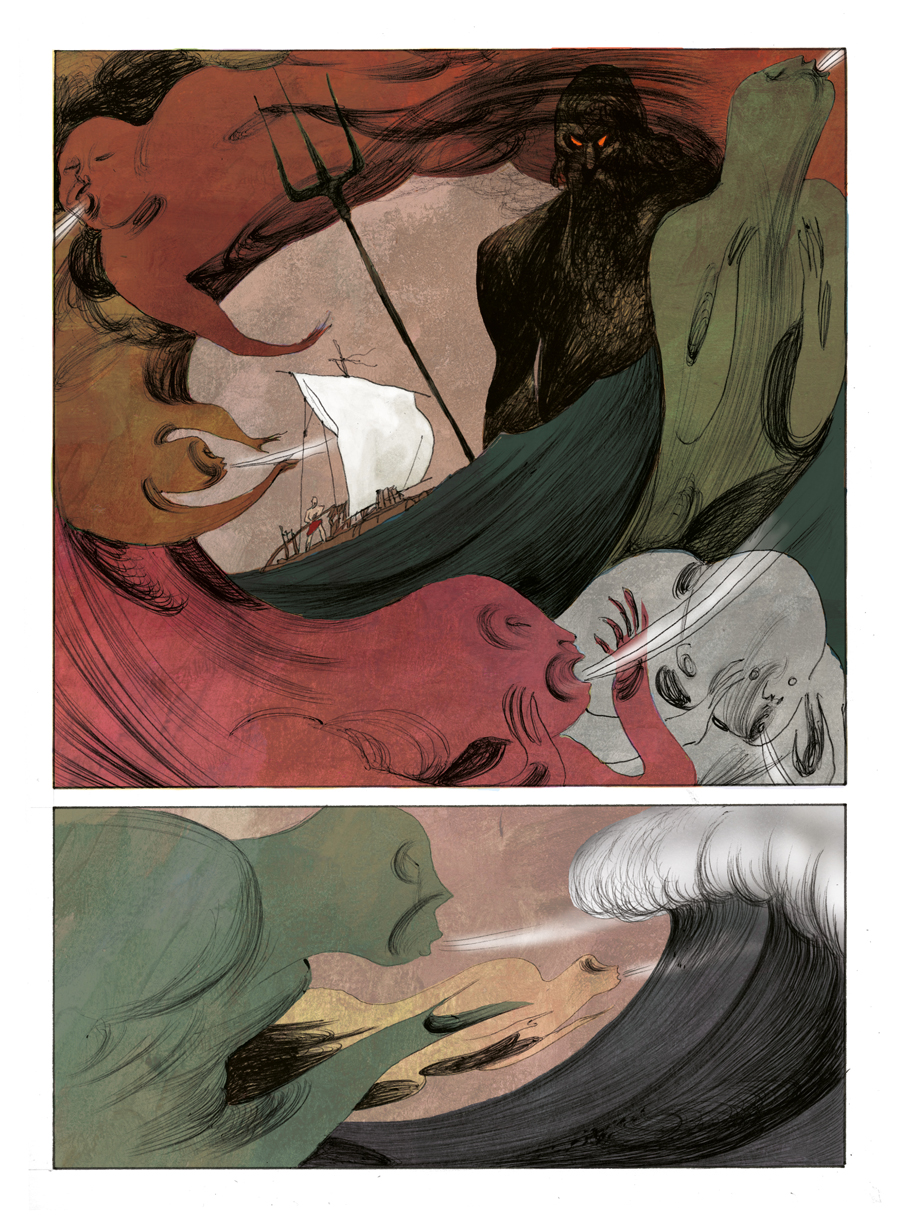 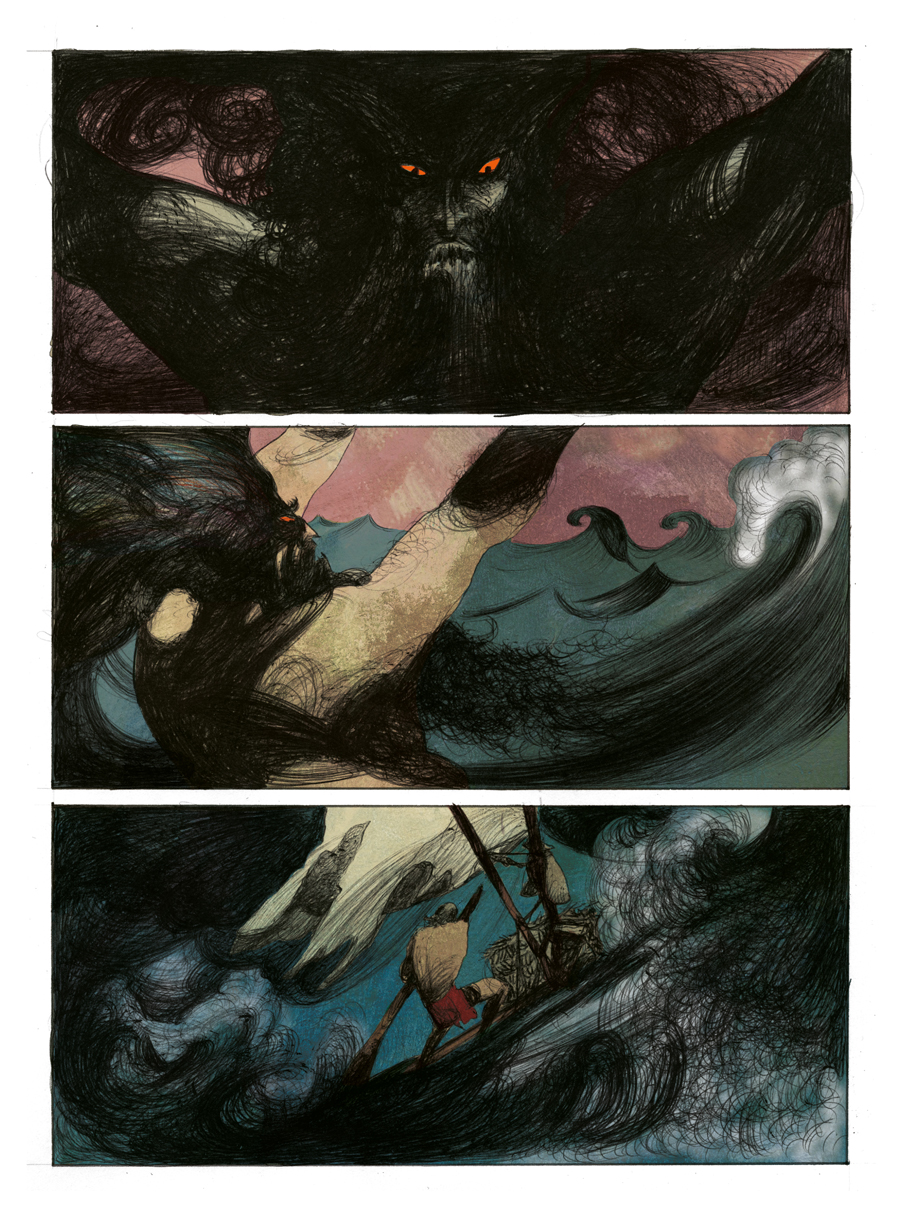 To portray The Odissey, the most well-known poem of ancient times, only with images may initially appear to be a contradiction.

This tale describes the adventures of a hero renowned not only by his legendary cunning but also by his mastery of words and language, the ability to narrate his own great feats and to convince and captivate whomever he encountered, be it mortal or divine.

In the third book of the Iliad the Trojan counsellor Antenor remembers hosting Odysseus in his very home while Greeks and Trojans tried to negotiate peace. He would describe him like this:

“He looked down motionless, his eyes locked on the ground, seemingly not knowing what to say. One could have deemed him lost in his own rage or even completely demented. But when from his chest arose a deep voice saying words like snowflakes in winter no man would have dared to defy Odysseus, no one would have dared to judge his appearance”. 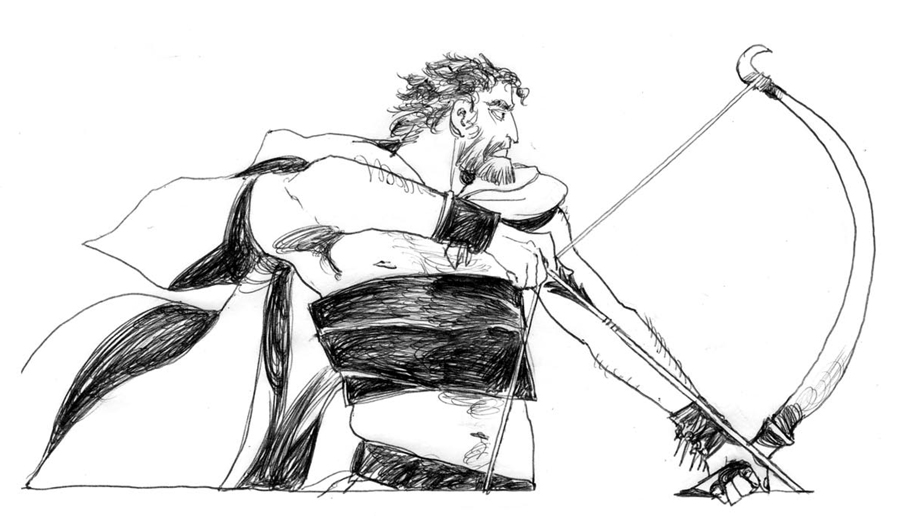 The king of Ithaca possessed the charm of words. How could he turn “snowflakes” into words without underestimating them? It is so that both silence and image were chosen as the ideal way to bring this story of seas and solitude once again into the light.

Then, stripped of written text and dialogue, the tale is solely constructed through the intertwining of images in a logical sequence.

Odysseus is a man gone beyond his limits, the only mortal to descend into the Hades and return alive, the last great hero to refer to the gods as if they were his equals.  His legend has been enriched throughout the centuries with more and more layers and sometimes even conflicting characteristics. In ancient times some believed him son of Sisiphus, cunning enough to cheat death herself. From this lineage would come the hero's pirate and rousing spirit. After all his name means “the hated one” in ancient Greek (due to the hatred of his defeated and roused enemies, like the sea god Poseidon). Others like the great Dante Alighieri in his Divine Comedy would describe him as a titanic hero that crosses Hercules's pillars for his love for knowledge and to pursue "virtue and wisdom”. The Homeric Odysseus this version evokes, is at the same time a hero and a man that wants nothing but to return home, so that he can be reunited with his wife, son and land. 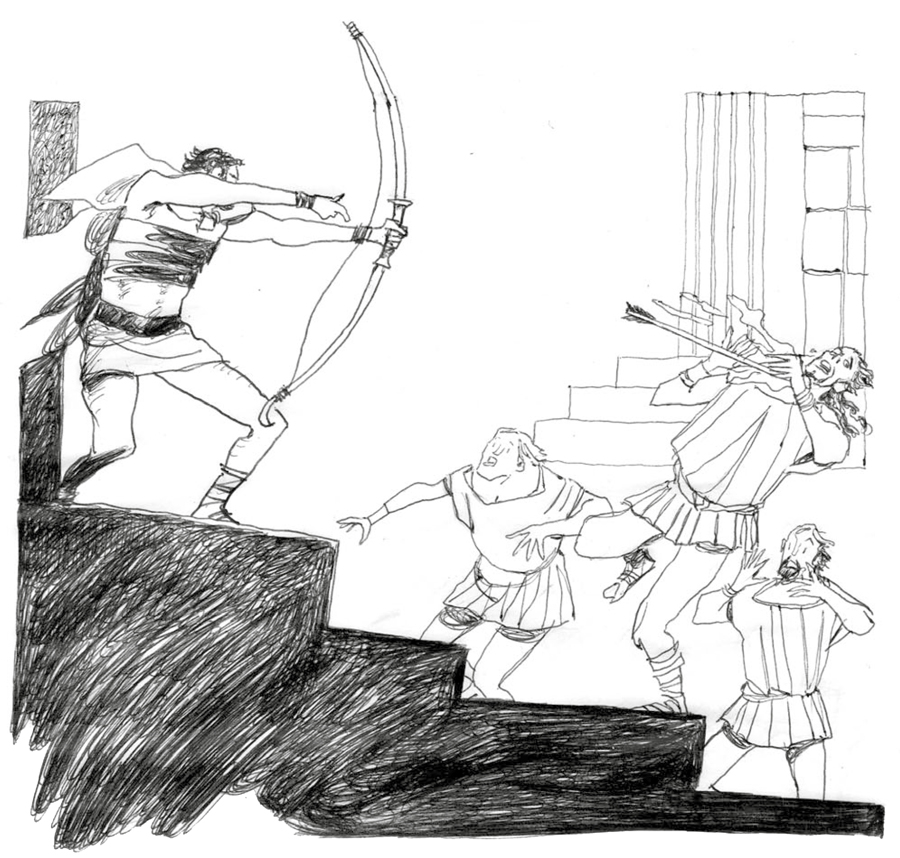 A surprisingly modern character, so similar to many of the antiheroes we commonly relate to nowadays.

During his journey, Odysseus will encounter and fall in love with sumptuous women and goddesses as radiant as they are dangerous: the nymph Calypso (“she who hides”), who after saving him from the shipwreck will keep him in a forced exile in the island of Ogygia; the mysterious Circe, daughter of the Sun and sister of the great witch Medea; young princess Nausicaa, daughter of Alcinous, king of the Phaeacians, that finds him on the beach of her island; Athena, both goddess of wisdom and his patroness, who appears in many forms to protect him; and finally Penelope, his wife and Queen, by whose side he so badly longs to be.

Not only does he meet gods among his travels but also mythical creatures such as the sirens, the souls of great dead men in the underworld, Scylla and Charybdis (two dreadful monstrosities of the seas that rule over what we now known as the strait of Messina) and the Cyclops (the atrocious and cannibalistic son of Poseidon). 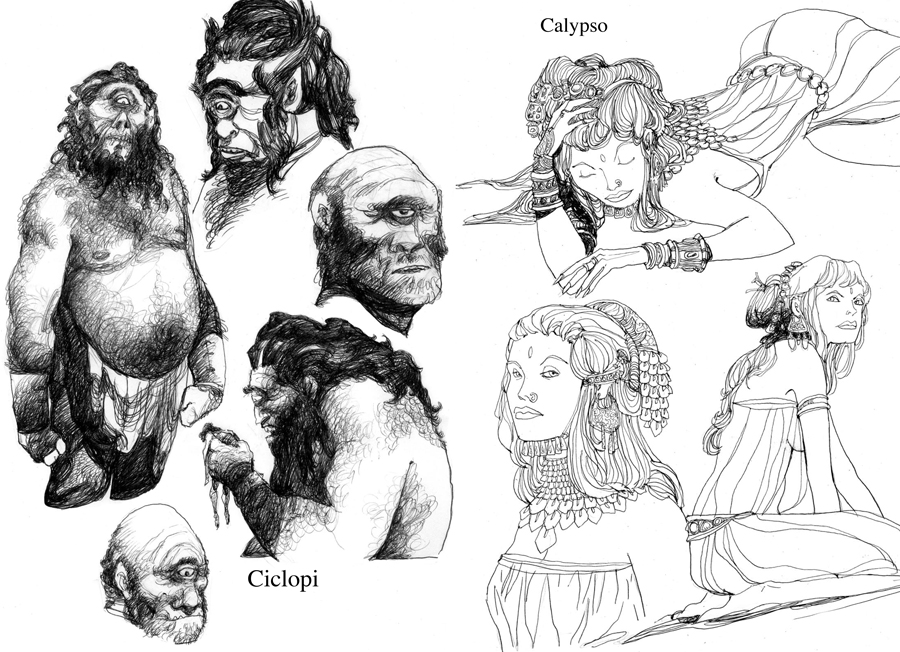 Even after facing such adversities, once back in his beloved homeland, Odysseus' trials won't be over: he will have to confront the warrior princes arrived in Ithaca to compete for Penelope's hand in marriage, as they all believed her a widow. This affront on his wife, his son and his land will only fuel the flame of Odysseus wrath, and his vengeance will be ruthless.

It's hard to believe all the events told in the Odyssey happened in what we know to be the Mediterranean. As Pihlostratus said, “Do you believe someone as cunning as Odysseus could be lost for ten years in a sea just slightly bigger than a pond?”. The rout he followed goes deep into unreal realms. It's a journey to distant universes, far away from the reach of men.

The places in which the story unravels are fabulous lands, fascinating images form the background of the different stages of the chronicle. 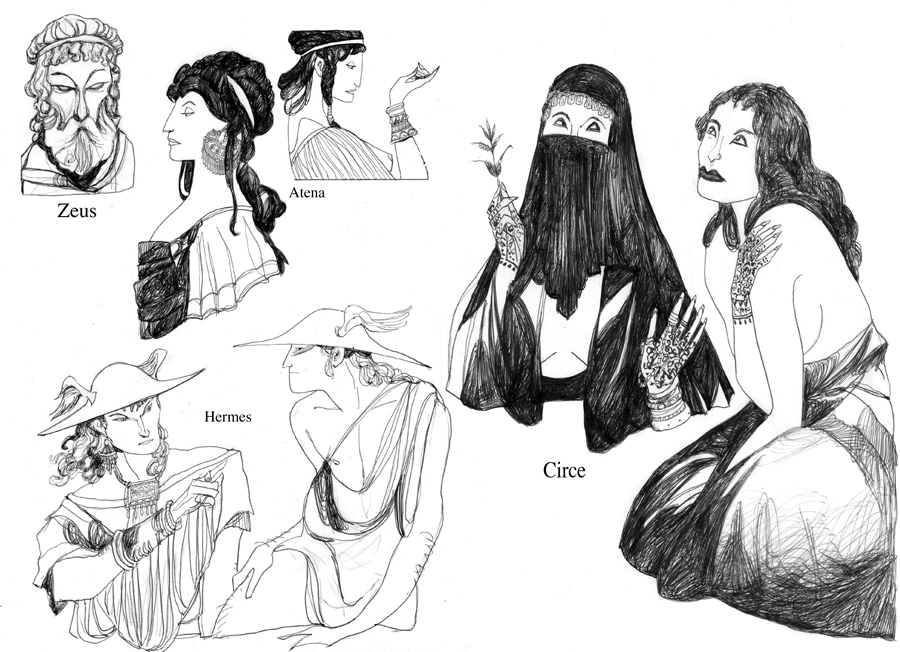 "In this graphic novel, I want the images to tell what
words cannot describe without trivializing.

I want to show the glances, the clothing, the fire's reflection,
the waves and the abyss in which Poseidon rests.

I want to draw pagan gods and have their power, their mystery
and madness shine through their appearance.

I want to show jewels remnant of buried civilizations.

I want the reader to be transported deep into and ancient and
primitive era, dragged into a dream framed in times of legend.

I want to take the reader to a suggestive experience and let his
imagination sense the dialogues of the Homeric poem". 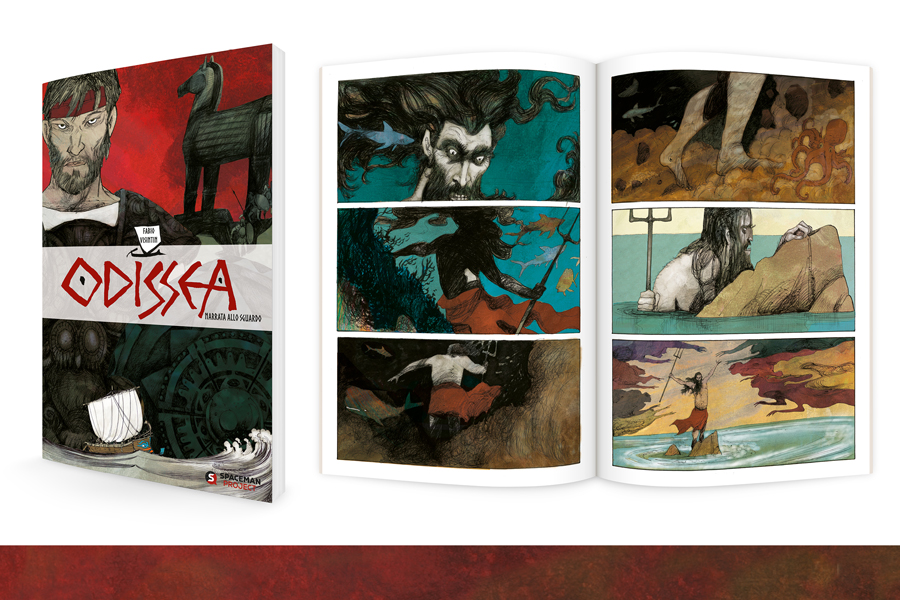 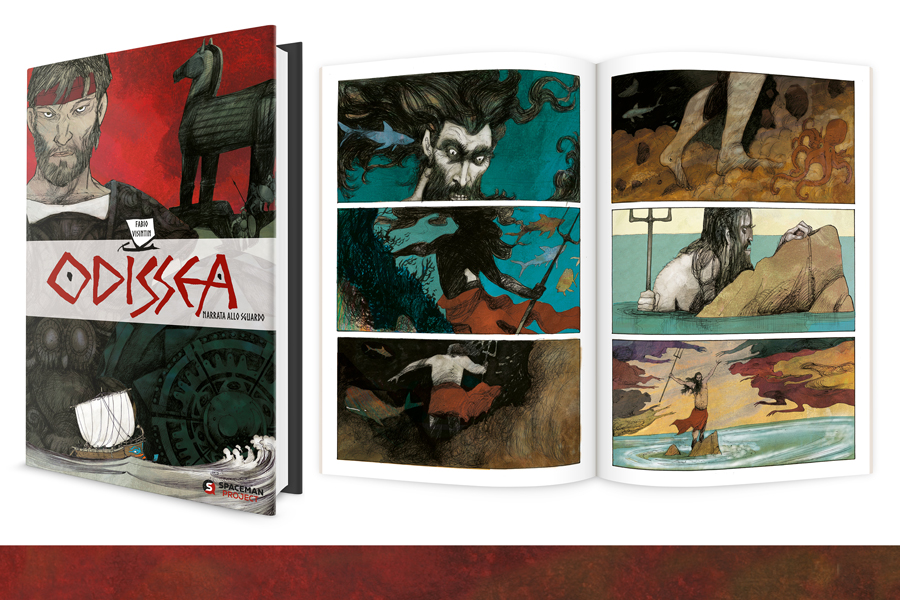 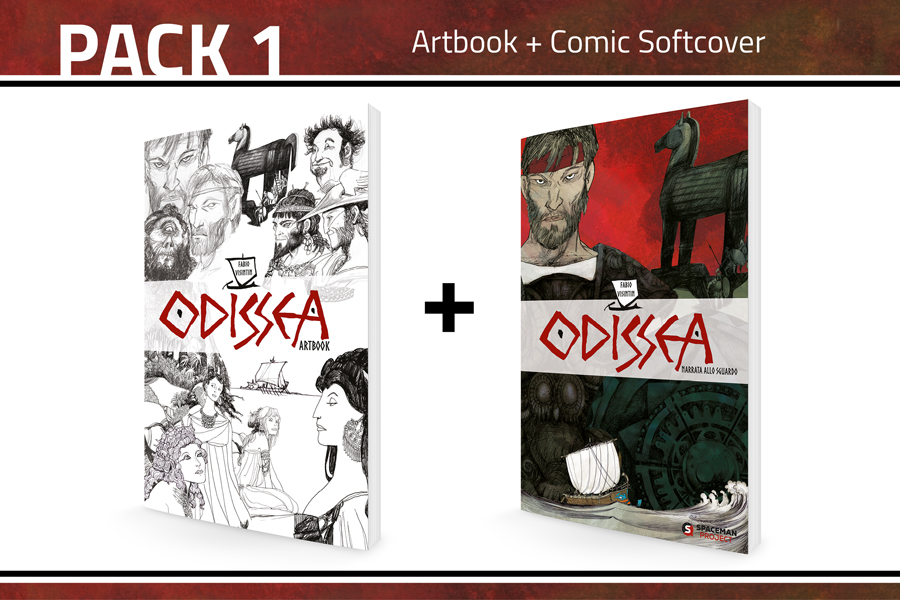 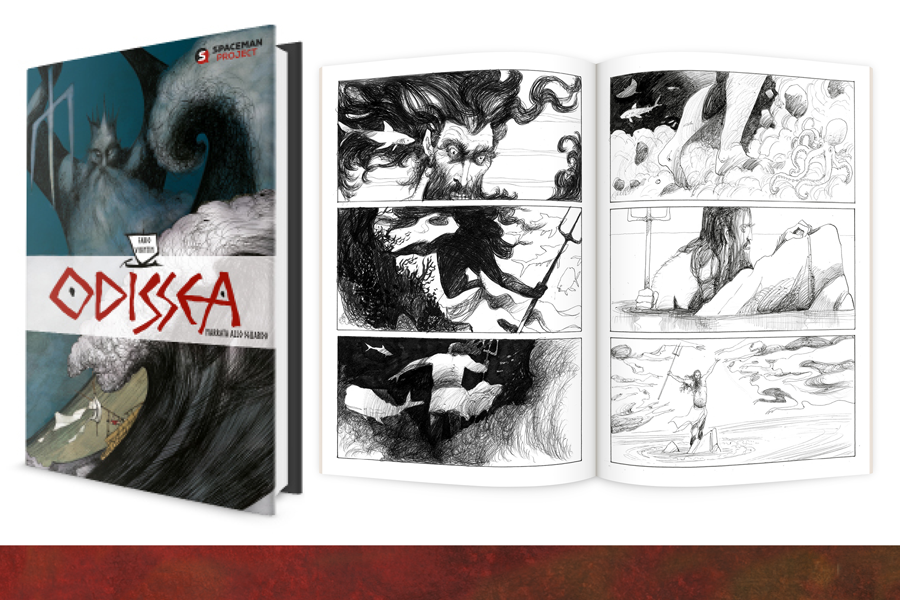 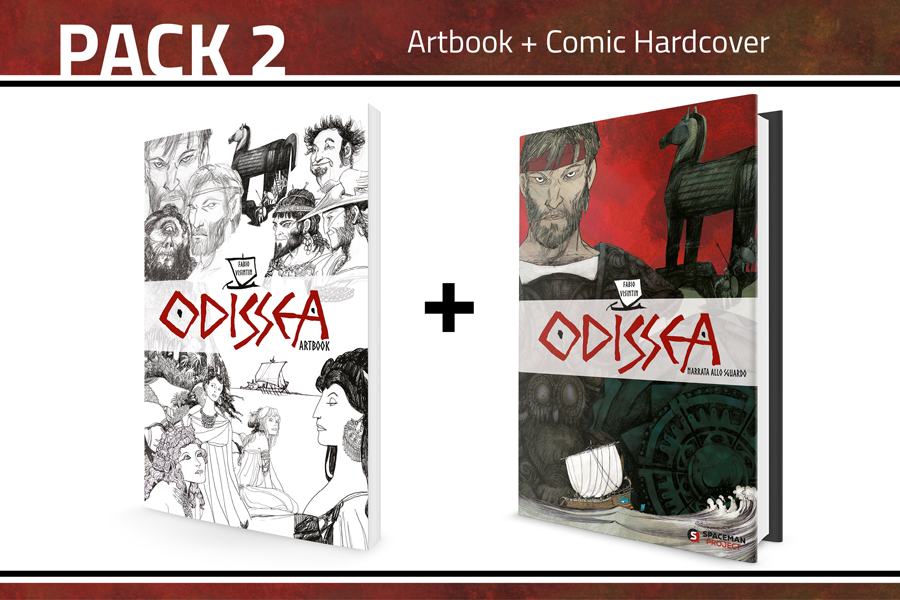 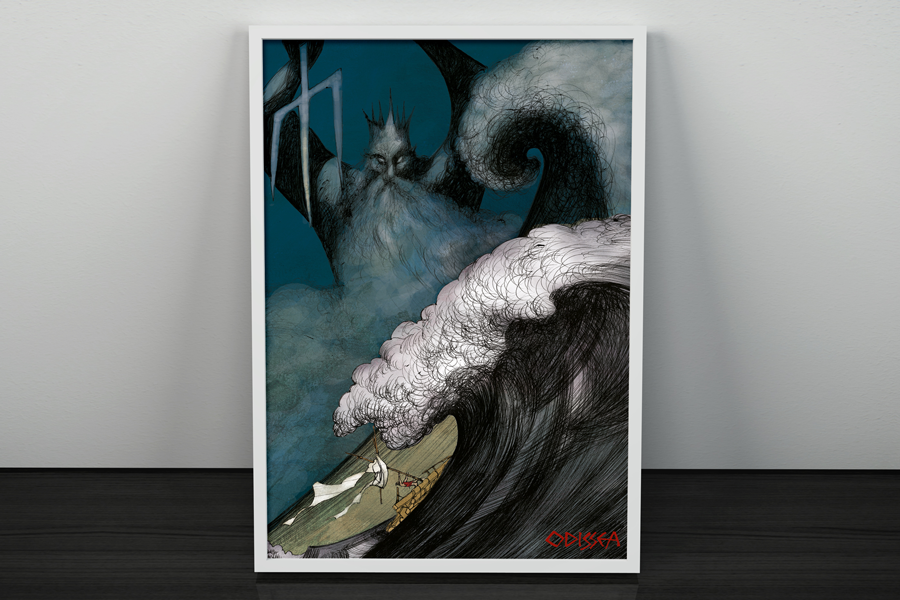 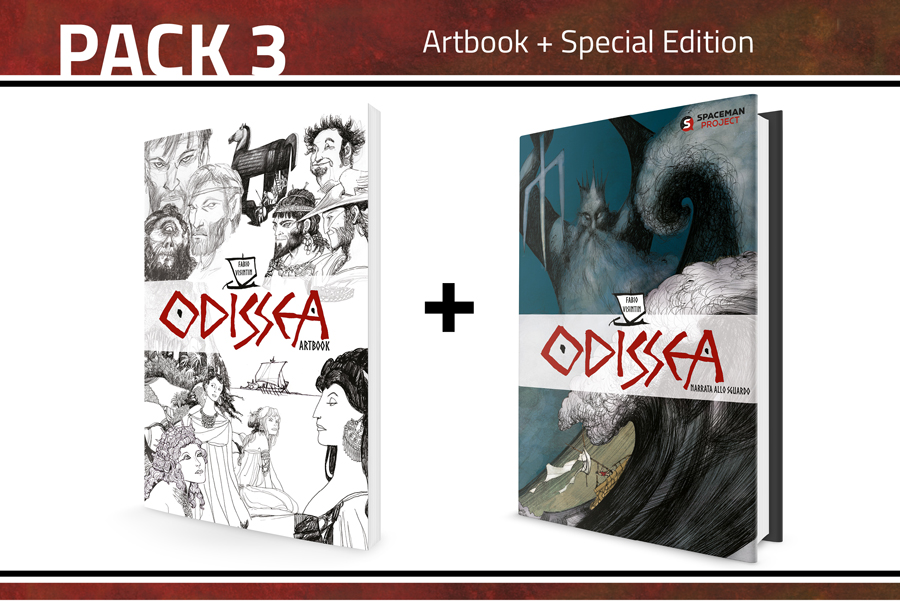